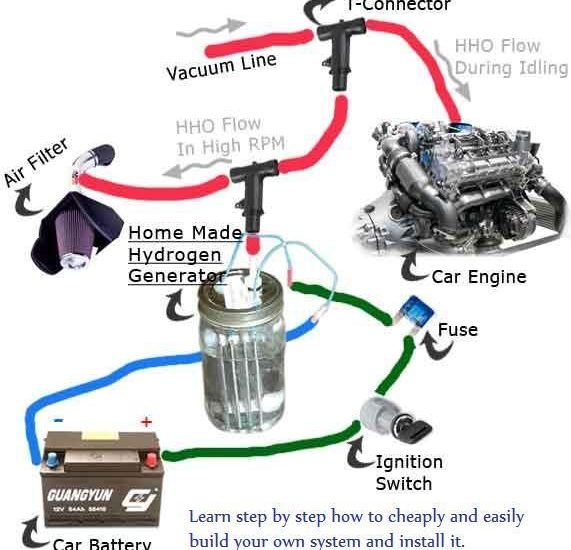 How to build a hydrogen generator?

How much does it cost to build a hydrogen unit? You can build simple one for $5 or a real good Hydrogen Generator for under $50

You will need the following components to start building your hydrogen generator:

Many different types of containers can be used to build a hydrogen generator, but the most common is a standard 6” to 8” PVC pipe cut to the desired length. The pipe must be completely sealed to allow the gas to be contained and captured. PVC caps or threaded ends can be used for this. Look at the $50 hydrogen generator it is built this way.

The stainless steel wall plates are those used to cover an old receptacle that is no longer used. These can be found in any hardware store. Stainless steel must be used because it does not corrode as regular steel will. Electrolysis will corrode normal steel within minutes.

The steel wall plates should be sandwiched together but not touching. Mount the grommets inside the “screw holes” of the wall plates, use the rubber washers on the outside of the plates and attach them together with the stainless steel screws but leave each screw attaching a separate plate. The plates must not touch each other but each screw needs to touch each plate.

Connect the red (positive) wire to the screw on one of the plates, and connect the black (negative) wire to the opposite screw on the other plate. You should now have about a 1/8” space between the two plates with each wire connecting each plate. One plate serves as a positive conductor while the other plate will serve as the negative conductor. When powered, the current passes through the water within the canister – breaking down the water into its single atoms (hydrogen and oxygen).

A plastic tube (normally around ¾”) should be inserted through a drilled hole near the top of the canister where the gas will collect. It is this tube that will connect to your vehicles intake system; supplying the Brown’s Gas. As a safety precaution, connect the hose to the hydrogen generator canister and run it into a separate canister which contains water – then finally connect it to the intake system of your vehicle. This secondary canister will help prevent a disaster in case the gas is somehow ignited by the engine.

Install an on/off power switch on the inside of your vehicle – and connect to the red wire supplying power to the hydrogen generator. There’s several different ways to connect the power switch so do a bit of research on this. Also install the fuse box in-line with the power supply wire. If a wire was somehow shorted out, the fuse will blow instead of causing electrical damage or fire to your vehicle.
Connecting to the Air Intake System

A hydrogen generator works by utilizing power to part the hydrogen iotas in a water atom separated from the oxygen molecule. This is finished by a cycle called electrolysis, and is acted inside the hydrogen generator. Hydrogen particles are drawn to the cathodic impetus, while the oxygen particles are drawn to the anodic impetus. The tension of hydrogen gas is then permitted to work to the ideal strain and conveyed to the end, your auto o

The hydrogen generator can be utilized essentially anyplace. It can control homes, places of business, as well as different vehicle modes like vehicles, trains and ships.
Proofs videos

Petroleum derivatives are the prevailing wellspring of modern hydrogen Carbon dioxide can be isolated from flammable gas with a 70-85% productivity for hydrogen creation and from different hydrocarbons to changing levels of effectiveness. In particular, mass hydrogen is typically delivered by the steam changing of methane or petroleum gas.

A bountiful on earth as a component, hydrogen is quite often found as a feature of another compound, like water (H2O) or methane (CH4), and it should be isolated into unadulterated hydrogen (H2) for use in power device electric vehicles. Hydrogen fuel consolidates with oxygen from the air through a power module, making power and water through an electrochemical interaction.
Creation
Hydrogen can be created from assorted, homegrown assets, including non-renewable energy sources, biomass, and water electrolysis with power. The natural effect and energy proficiency of hydrogen really rely on the way things are created. A few undertakings are in progress to diminish costs related with hydrogen creation.
There are multiple ways of creating hydrogen:
Petroleum gas Changing
Blend gas — a combination of hydrogen, carbon monoxide, and a limited quantity of carbon dioxide — is made by responding petroleum gas with high-temperature steam. The carbon monoxide is responded with water to deliver extra hydrogen. This technique is the least expensive, generally productive, and generally normal. Gaseous petrol changing utilizing steam represents most of hydrogen delivered in the US every year.

Combination gas can likewise be made by responding coal or biomass with high-temperature steam and oxygen in a compressed gasifier. This converts the coal or biomass into vaporous parts — a cycle called gasification. The subsequent blend gas contains hydrogen and carbon monoxide, which are responded with steam to isolate the hydrogen.
Electrolysis:

An electric ebb and flow parts water into hydrogen and oxygen. On the off chance that the power is delivered by sustainable sources, for example, sunlight based or wind, the subsequent hydrogen will be thought of as inexhaustible also and has various emanations benefits. Power-to-hydrogen projects are taking off, utilizing an overabundance of inexhaustible power, when accessible, to make hydrogen through electrolysis.

Sustainable Fluid Transforming:
Inexhaustible fluid fills, like ethanol, are responded with high-temperature steam to create hydrogen close to the place of end-use.
Fermentation:
Biomass is converted into sugar-rich feedstocks that can be fermented to produce hydrogen.
A few hydrogen creation techniques are being developed:
High-Temperature Water Parting:
High temperatures created by sunlight based concentrators or atomic reactors drive compound responses that split water to deliver hydrogen.
Photobiological Water Parting:
Microorganisms, like green growth, polish off water within the sight of daylight and produce hydrogen as a side-effect.

A hydrogen generator doesn’t store immense amounts of hydrogen inside itself whenever, either during activity, or when not being used. This intends that assuming that a release happens, just a tiny amount of hydrogen is probably going to get away. On the other hand, a full hydrogen chamber might contain upwards of 11,000 liters of hydrogen gas; which could all be delivered in the event that a hole were to happen. Great hydrogen generators likewise contain sensors to recognize hydrogen and water spills, and shut down hydrogen creation when a hole is distinguished.